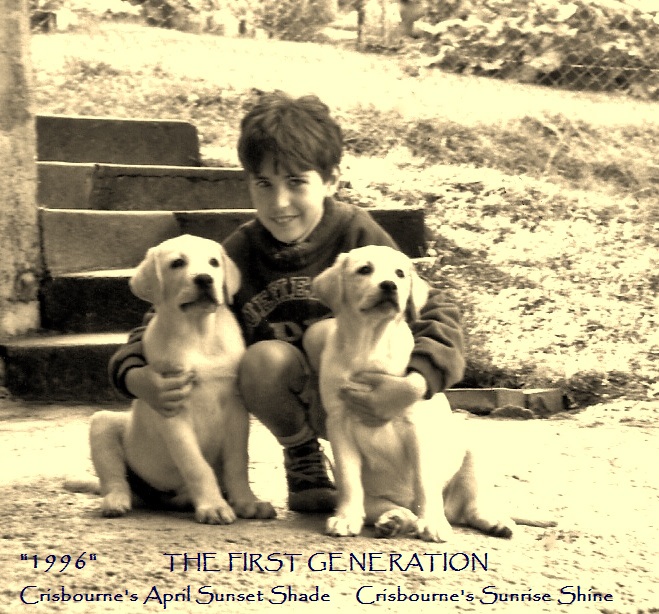 Breeding", it’s very simple, in theory, to explain how to select a top Labrador ... but succeeding is a very different matter!

Actually, I believe that no one can really teach it, in that all the good breeders have their own methods and ideas that have evolved through years of practice and observation “in the field”.

So the only honest and intelligent thing to do is to get an idea of the three methods of selection that have proved to be more or less valid in time, and then decide whether to follow them or not.

They are called: LINE- BREEDING / OUTCROSSING /IN- BREEDING

Surely all the good breeders, especially those who have been able to reach the highest levels of selection through the years, will agree that in order to produce a strain of good Labradors, “you must” carry out a certain degree of LINE-BREEDING : which could be defined as a combination of lines that, in 3 or 4 generations,  take back to a good well-known dog or bitch  or, very often, to 2 good well-known dogs or bitches, having the rest of the pedigree made up of names of dogs that are all different from each other.

The following are considered as the best line-breeding mating:

- aunt/nephew (that is, a bitch mating her sister’s best son)

- niece/granduncle (that is, a bitch mating her grandmother’s or grandfather’s

This method is recognised as the best of all, in that, one is sure that the dog or dogs that have been chosen to replicate are very good and really well known ! The advantages of this method come from the hope that both the breeder who decides to employ it, and those behind him, recognising the problematic areas where the defects lie, have tried to stay away from them; at the same time, the virtues of the previous generations, recovered and replicated through mating, will be transferred to its stock in the same way as fresh blood will be introduced.

And so, through line-breeding, it is possible to predict the size the animals will reach once they are adults and the “type” of Labrador one is to expect. After all, if the bitch chosen for the litter is a fine, healthy and good-natured specimen, why should one decide to get out of the line and have her mate with the risk of spoiling all the good work done by the breeders who came before us??? It is also true, however, that one runs a risk if one only knows the name of the dog or dogs that one gets back through line-breeding, and does not know them personally, because the dogs may have, or may have had, hidden, or even serious, defects. This is the reason why it is believed that every truly good bloodline is bred within the same bloodline, precisely because experienced and successful breeders know their stock from head to toe, and know how to use their own bloodline in the best of ways !

Instead, every good breeder dreads the moment in which they have to employ a complete OUTCROSS, and fortunately this does not occur very often, because the outcross is one of the most difficult  things to handle when breeding a line. OUTCROSSING is, precisely, another selection method and consists in introducing a dog, through mating, that not only does not have, within its genealogy, any dog belonging to our bloodline but also has not even had, in its pedigree, a name in common with our bitch for at least four generations back; a typical example of outcrossing is the mating of a dog that has been wholly created for  field trial to a dog only selected  for shows. At times this method is absolutely necessary when fresh blood must be introduced. However, outcrossing must always be employed wisely, by attempting to gather as much information as possible on the new bloodline that one intends to introduce; there is a great risk that it may take years to eliminate the defects and new and unexpected problems that may be acquired through an outcross!

The longer one stays within one’s bloodline, the more certain one will be about what, good or bad,  will come out....the more you know the devil the more you can fight it !

The third method of selection is IN-BREEDING: it is easier to handle than outcrossing, in that, one knows one’s own bloodline very well, though there are risks.

IN-BREEDING consists in mating a subject directly with one of its closest relatives, without introducing any fresh blood. The main combinations are:

This method employing such close mating fixes all the virtues in the progeny very quickly, but also fixes all the defects and problems that may not be evident but latent, within the bloodline. Several marvellous subjects have been bred this way…but we don’t hear much about the ones that are not good. Better  leave this method  to the highly experienced breeders only and, in any case, resort to it only if it is strictly necessary; one of these 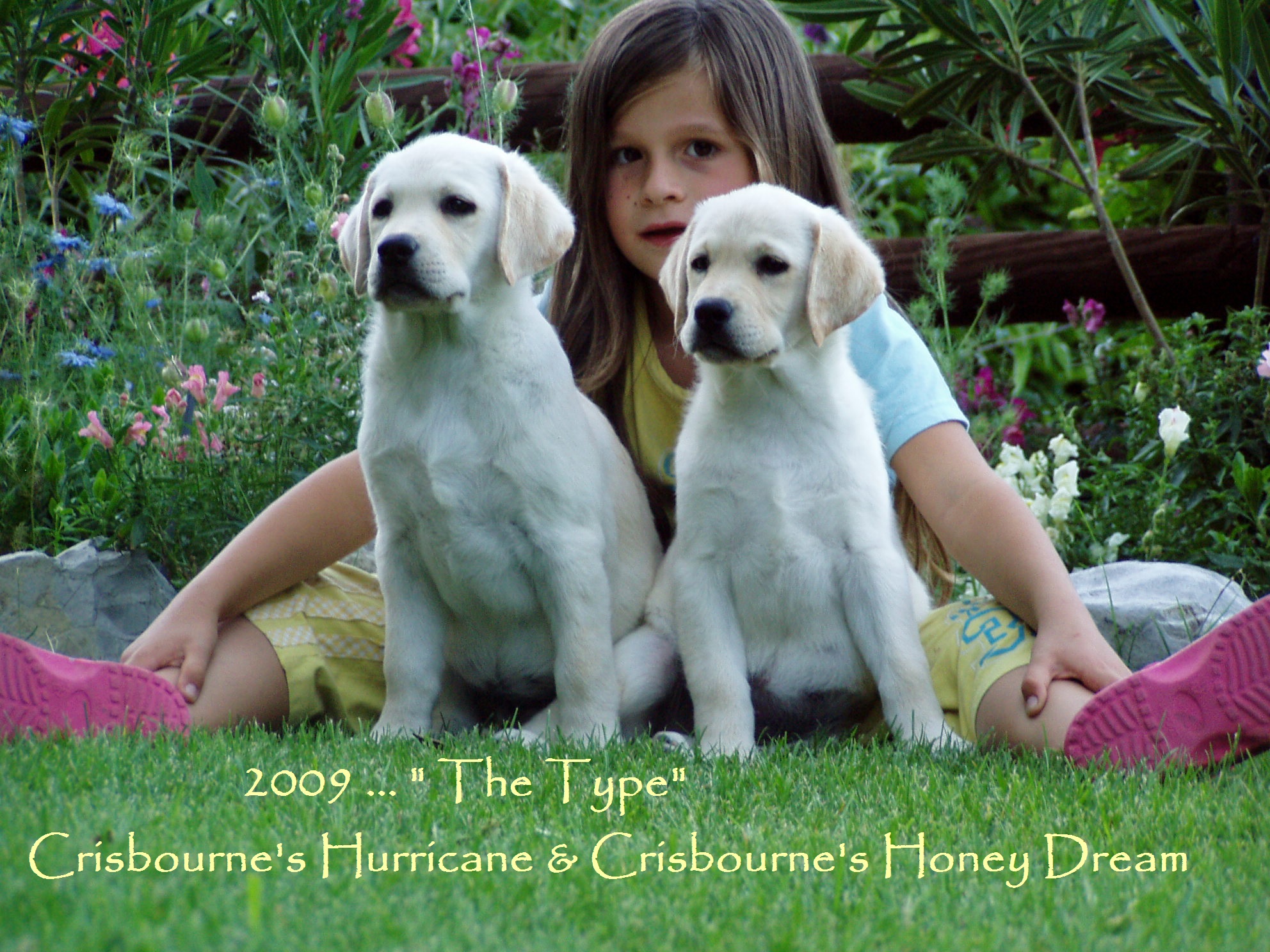 cases may be incompatibility of blood groups which may prevent some bitches from getting pregnant, or successfully completing pregnancy, if they do not mate with subjects having a compatible blood group….that is, their close relatives.

It may now seem obvious and trite to write that mating based on choices that are mainly conditioned by a sire’s number of victories in the ring, or just by his outer aspect, without taking into due account what his pedigree is like, or what dogs it is formed by, is definitely open to criticism.

Breeding with intelligence, and following a method, in order to reach the top and stay there, involves careful planning of every mating encounter, not just going by the instinct of the moment, but by thinking  and reflecting, before using just any dog, about how exactly one wants to employ its progeny in the years to follow with members of other litters that will be bred, or those that have already been bred previously. I myself, after having evaluated and found a sire suitable for a particular bitch, as regards the type, characteristics and future prospects of the progeny, prepare to breed every litter  with the intention, the enthusiasm and the hope of keeping for myself one or two promising female pups, and arrange to have the best male pup stay with a nearby family so I can follow its  growth, and especially to have a chance to employ it in the future.

Obviously, one must not forget or underestimate what we call the “S” factor, that is, the “Surprise” factor (not to call it differently…) …that is, not all plans are as successful as one hoped, and not all results always live up to our expectations. Thus, at times, the best females do not always turn out to be good for mating, or do not mate at all, and pups that were not convincing or never captivated our attention turned out to be “magnificent swans” as they grew.

And what to say about the amazement we can feel when discovering that our, no longer young, yellow female, at her fourth and last litter, surprisingly turns out to be a producer of chocolate puppies  ?! This is what happened to a breeder, a friend of mine, about ten years ago, when he decided to have his yellow female mate to my black Shade male, who in turn had been an unsuspected carrier of 3 colours, up to that moment!

But this is what is great about breeding ! And I believe that any breeder will confirm it; we all complain about the “S” factor, but actually it is precisely this that gives us the right dose of uncertainty and mystery, that does not allow us to get bored and that challenges us to go forward every time to see what happens  !

What I have been trying to do these past years was to line-breed subjects that had virtues as similar as possible to my first Labrador bitch, my dear Honey, the one that helped me get acquainted with and love this breed…. to the point of deciding to try to select it.

I think the bitch with which we started off, the one the English call "the foundation bitch", affected our criterion for judgement and choice of specimens encountered in the subsequent breeding insofar as it made us particularly sensitive to the defects and virtues she had, leading us to search for and preserve the former in the subjects that descended from her, and escape and correct the latter, by choosing the right sires.

It is also true that, throughout the years, thanks to the books I have read, to the breeders I have had the pleasure to meet, and with whom I have had the opportunity to compare skills, and especially thanks to experience with my dogs and every hour of the day spent watching  them, my idea of the perfect Labrador has, little by little, improved and evolved… ….So, in answer to someone who once asked me why a breeder should necessarily raise dogs according to a “type” and not simply work to raise good, healthy, beautiful and well-behaved Labradors, whether similar to each other or not,  I said that the “type” was not a choice but rather a logical and inherent consequence for those  who know clearly what they want and do not want from their Labrador !

If, with the passing of time, breeders have established their notion of ideal Labrador , all their steps, from the choice of the sires for mating to the choice of which puppies to keep for themselves, will hold fast to that notion and also, with the help of their sixth sense, they will find themselves raising, through the years, their own “type” of Labrador, which can be distinct  from that of other breeders and will be based on its own bloodline. This is what I think every Good Breeder should pursue in order to be considered such.